Frankie the Squealer is a character released with the Level 58 content update on September 17, 2015. He is unlocked upon completion of the first part of Frankie the Politician.

Frankie the Squealer is a married, low-level member of the Springfield mafia and associate of Fat Tony. He is known, as his name suggests, for his indiscretion. He can't help squealing, because it makes him feel big. 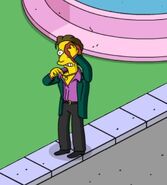 Frankie the Squealer trying not to squeal.

Frankie getting his face washed

Add a photo to this gallery
Retrieved from "https://simpsonstappedout.fandom.com/wiki/Frankie_the_Squealer?oldid=245651"
Community content is available under CC-BY-SA unless otherwise noted.