) was a limited time currency during the Treehouse of Horror XXVI Event. There is a chance that tapping on Nightmares like Disco Zombies and Snakes will reward the Player with a Formless Terrors.

Formless Terrors are used by releasing them into the towns of the player's neighbours (Origin Friends). If the player taps them in their own town they will be rewarded with other currencies used during the XXVI event. 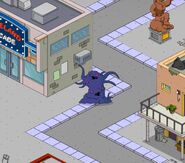 A Formless Terror loose in a player's town.
Add a photo to this gallery
Retrieved from "https://simpsonstappedout.fandom.com/wiki/Formless_Terrors?oldid=219542"
Community content is available under CC-BY-SA unless otherwise noted.