The Flying Bats are a limited-time decoration that was released on October 4, 2016, as part of the Treehouse of Horror XXVII Event. It was a craftable item. Each item crafted contributed to levelling up the Construction Yard; additionally the first four rewarded the player with 45 MAG Points each.

They were re-released on October 3, 2017, as part of the Treehouse of Horror XXVIII Event. They were one of items player could craft at the Charmer's Market using Goblin Gold. 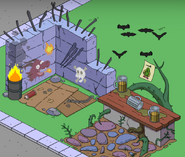 Flying Bats with Kearneymon's Alley (left) and Lewd's Bar (right)
Add a photo to this gallery
Retrieved from "https://simpsonstappedout.fandom.com/wiki/Flying_Bats?oldid=203713"
Community content is available under CC-BY-SA unless otherwise noted.