Fatov is an imaginary mascot of the 2014 Winter Olympics in Sochi, Russia. Bart creates a pin of this character by cutting out the lower part of Homer's face from his driver's license, turning it upside down, and adding eyes to the chin. 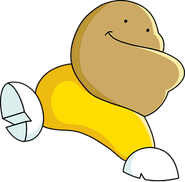 Fatov's unlock screen.
Add a photo to this gallery
Retrieved from "https://simpsonstappedout.fandom.com/wiki/Fatov?oldid=244655"
Community content is available under CC-BY-SA unless otherwise noted.