Fat Tony is a character that was first available during the Penny-Wiseguys Promotional. In April 2013 along with the Level 28 update, he was permanently introduced to the game for players who missed out on getting him during the promotional. He is unlocked upon building the Businessman's Social Club if the player didn't already have him.

Marion Anthony D'Amico, born (February 20 1942) also known as William Williams, or most commonly, "Fat Tony"— was the Springfield mob boss. He has been behind several of Springfield's criminal enterprises. His rackets included illegal gambling, cigarette smuggling, bootlegging, fraud and selling false IDs. He had also been seen bribing and making secret deals with Mayor Quimby.

Fat Tony has a son, Michael, whom he used to drive to or from school. He was a widower and said his wife, "was whacked, by natural causes." Fat Tony and his associates conducted business and socialized in the Legitimate Businessman's Social Club. His Mafia henchmen included Louie, Legs, Johnny Tightlips, Frankie the Squealer, Joey and Jimmy the Snitch.

Fat Tony died in the episode "Donnie Fatso" of cardiac arrest at age 40, but his cousin Fit Tony gained weight and took over as the new Fat Tony.

Fat Tony 'getting rid of a problem'.

Fat Tony possessed by a ghost during the Treehouse of Horror XXIV Event. 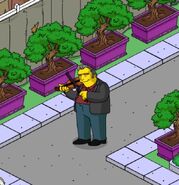 One of Fat Tony's random level up messages.

One of Fat Tony's random level up messages.
Add a photo to this gallery
Retrieved from "https://simpsonstappedout.fandom.com/wiki/Fat_Tony?oldid=257458"
Community content is available under CC-BY-SA unless otherwise noted.