Fangs was a limited-time currency released on October 3, 2018, for the Treehouse of Horror XXIX Event. It was the Event's Act 1 Personal Prize currency. When Act 1 ended on October 17, 2018, Fangs was replaced by Fur.

Fangs could have been obtained in the following ways: 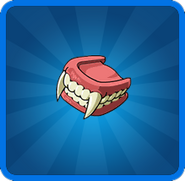 The event guide for Act 1.

Curse Bonus Guide.
Add a photo to this gallery
Retrieved from "https://simpsonstappedout.fandom.com/wiki/Fangs?oldid=225601"
Community content is available under CC-BY-SA unless otherwise noted.