Elves were a limited time NPC released during the Christmas 2014 Event.

Elves were one of the ways to obtain Presents during the Event. Each elf produced 4 presents every four hours, and their tasks were completed at the Toy Workshop.

Elves were obtained many different ways:

As soon as each elf was unlocked, they went straight to the Toy Workshop where they began their 4h tasks.

In the Toy Workshop, the player could keep track of the total number of Elves they had, how many total presents they would earn from the Elves, and the progression of the 4h task for each individual elf. Once the jobs were completed, the Elves exited the Toy Workshop and a (

)Present Icon appeared (similar to the Thumbs Up Icon), above each individual elf, to notify the player that the job(s) were done. When tapped, the players would earn their income and the Elves automatically returned to the Workshop to begin their tasks once again.

Once the player unlocked the Toy Workshop Bell, the player could tap on the bell and collect presents from all the elves (who finished their jobs) at once, instead of having to tap them individually.

During Part 2 of the Event, Elves began roaming Springfield (just like the bunnies did during the Easter 2014 Event) during Pt. 3 of the Project After-Party questline. Tapping on each Elf awarded the player with one Elf in a Bottle and a chance to win some Cogwheels if the player had already unlocked them after Project After-Party Pt. 3. Once the player collected Elves in Bottles and built the Elf Cannon, the players shot the elves out of the cannon and was awarded with Elf Bells.

Every 15 minutes 3 new elves arrive in Springfield, with a maximum of 40 elves per town and 20 elves as back up.

Similarly to the Bunny Stunner from the Easter Event, once the player won the Elf Bottler, the player could press and hold their finger on the screen and shock waves would appear and shock any Elves within the radius, and made collecting the Elves easier. Just as the player could with the Bunny Stunner, they could then slide their finger across the screen to cover other areas of Springfield and collect other Elves with the same tap. 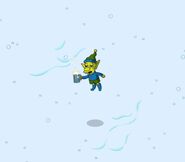 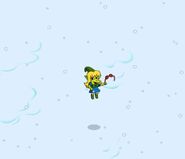 Moonin' elf.
Add a photo to this gallery
Retrieved from "https://simpsonstappedout.fandom.com/wiki/Elves?oldid=156123"
Community content is available under CC-BY-SA unless otherwise noted.