based on Upgrade Level

Based on Upgrade Level

The Elf Cannon was a limited time decoration released on December 24, 2014 during Part 2 of the Christmas 2014 Event. Once completed, it allowed the player to shoot Elves in Bottles to "deport" the Elves and earn Elf Bells.

Similarly to the Castles during the Clash of Clones 2014 Event, the Elf Cannon had upgrades that could be applied to it. Each upgrade raised it a Level, and each Level added a new effect to the Elf Cannon to improve it.

The Elf Cannon had three different skins to it which were automatically changed as the player Leveled it up. Each upgrade could be bought with Cogwheels. As the Levels increased, the cost of each upgrade increased. There were a total of 20 Levels that the player could upgrade the Cannon, and any Level beyond that was simply for "bragging rights".

At its original Level (without upgrades) the Elf cannon could fire 9 Elves in Bottles at a time, and each Elf in a Bottle paid out 2 Elf Bells. In total: 18 Elf bells per 9 Elves in Bottles. The player had 3 shots for the cannon before a cool down time began. The cool down time started at 3 hours and 45 minutes and could be decreased by leveling up the Cannon. 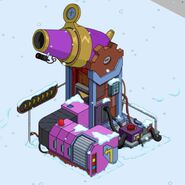 Elf Cannon primed and ready to fire.
Add a photo to this gallery
Retrieved from "https://simpsonstappedout.fandom.com/wiki/Elf_Cannon?oldid=167912"
Community content is available under CC-BY-SA unless otherwise noted.