Egg on Your Noggin'

The Egg Nog Bar is a limited time building first released with the Christmas 2013 Event. It was the first prize of the event. During the event, it produced 1 spin token every 24 hours which could be used to win prizes on the Holiday Wheel. It was re-released as a premium item for the Christmas 2014 Event and Winter 2015 Event. As such, it earns at a premium rate.

It returned as a rebate offer during The Invasion Before Christmas 2017 Event. It gave a bonus of 50 donuts after purchasing. 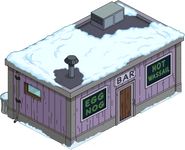 Add a photo to this gallery
Retrieved from "https://simpsonstappedout.fandom.com/wiki/Egg_Nog_Bar?oldid=221319"
Community content is available under CC-BY-SA unless otherwise noted.