Egg Council Guy is a limited-time NPC that was released on April 15, 2014, as part of the Easter 2014 Event. It was one of the possible prizes of the Blue Easter Box.

It was re-released for the Easter 2015 Event as a premium purchase for 40 Donuts. It returned for St. Easter 2016 Event and the Easter 2017 Promotion for the same price.

It returned on March 28, 2018 during the Resurrection of Rigellian Christ 2018 Promotion.

Egg Council Guy is seen in the Season 6 episode 'Homer the Great' when Homer discovers a secret society, named the Stonecutters, with members who are his friends.

He is from a series of real-life commercials, titled "Bad Rap," which were aimed at alleviating concerns over eggs' cholesterol content, and promoting them as a healthy food. 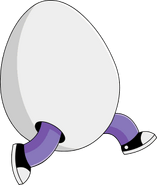 Add a photo to this gallery
Retrieved from "https://simpsonstappedout.fandom.com/wiki/Egg_Council_Guy?oldid=214190"
Community content is available under CC-BY-SA unless otherwise noted.