Eddie is a character in the Civil Servants character collection. He is unlocked upon purchase of the S.W.A.T. Van along with Lou, another police officer in Springfield. He is the one of three policemen in the game, the other two being Lou and Wiggum. Eddie was released in August 2013 along with the Level 33 update.

Eddie is one of the two police officers who aid Chief Wiggum on almost every mission. Unlike Lou, he is rather unintelligent, but still not as dumb as Wiggum. 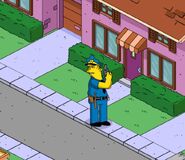 Eddie setting his baton to twirl.
Add a photo to this gallery

Retrieved from "https://simpsonstappedout.fandom.com/wiki/Eddie?oldid=252879"
Community content is available under CC-BY-SA unless otherwise noted.