Roger Meyers Jr. contacts Abe to make a replacement for the annual show "The Happy Little Elves Save Christmas" and the script is written as usual by Bart and Lisa.

The episode starts at the Springfield Nuclear Power Plant where the workers are slaving through the holiday. Meanwhile, the owner, C. Montgomery Scrooge, counting his coins the bowels of the plant, Homer Cratchit gets visited by the Magical Little Man. Homer tells for Magical Little Man at he wants rekindle the magic of Christmas at Scrooge. On the night hits Scrooge by the Magical Little Man some thought taking him on a mystic tour of his misspent life. Smilin' Joe Fission then takes up and they start to fight. After the two fought finish, it has been peace since on the Earth, because it has wiped out. After Abe submitted the manuscript Bart and Lisa wait on the show to be broadcast in mid-December but it turns out that they replaced it with the former annual show. Abe likes the episode and says to Bart and Lisa at this is his best script. 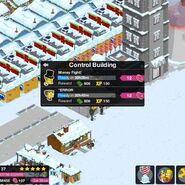 Ebenezer Burns in the show

Ebenezer Burns and Smithers money fighting.
Add a photo to this gallery
Retrieved from "https://simpsonstappedout.fandom.com/wiki/Ebenezer_Burns?oldid=256764"
Community content is available under CC-BY-SA unless otherwise noted.