The Slime of Your Life

Consumerism: +10
The Drive-In Theater is a limited-time premium building first released during the Treehouse of Horror XXV Event. The building is much like a high-level Cletus's Farm. Money is paid to play a show, which when completed will reward the player with significantly more money than was originally paid. However, unlike Cletus Farm's crops, the Drive-In Theater's programs do not expire. Though the store advertises the Drive-In Theater as a character-building combo, the Space Mutant is not unlocked until the second part of The Slime of Your Life quest.

It returned in the Treehouse of Horror XXVI Event, during the Halloween of Horror episode tie-in. It was re-released again for the Deep Space Homer 2016 Event.

It returned on October 3, 2018 during the Treehouse of Horror XXIX Event as a possible prize in the THOH Mystery Box.

The Springfield Drive-In Theater is a drive-in movie theater in Springfield. It can be seen from the rooftop garden of the Kwik-E-Mart, where Apu told Lisa he watches movies for free. Homer was once distracted from committing insurance fraud for Moe by the film Hail to the Chimp!, which was showing at the drive-in. 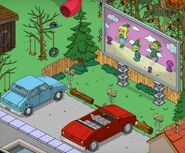 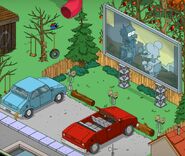 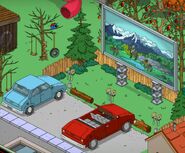 Bored of the Things: Extended Cut.
Add a photo to this gallery
Retrieved from "https://simpsonstappedout.fandom.com/wiki/Drive-In_Theater?oldid=233730"
Community content is available under CC-BY-SA unless otherwise noted.