Drederick Tatum is a character released on April 10, 2013 for the Whacking Day Event. He was the 9th prize of the event. He is unlocked upon completion of the Springfield Coliseum. He was re-released as a premium character after the event, however his payout didn't change to premium rate until the Level 38 update.

Drederick Tatum is a former boxer of Springfield. He seems to have quit boxing. He used to be known to have a bad temper since he was put under arrest because of pushing his mother down the stairs, but now he can control his actions. Drederick Tatum was a former Olympic Gold medallist, first became World Heavyweight Champion after defeating Watson in the heavily promoted "Bout to Knock the Other Guy Out!" He grew up in Springfield, recalling that that town was a dump (since he once said this: "If you ever see me there again you'll know I really [bleeped]-up bad"). He later served time in prison after pushing his mother down the stairs. While serving time in Jail, he was apparently intimidating to the other prisoners and guards, as evidenced by the fact that he managed to quell a prison riot simply by telling them to say "Hey guys, come on! Shut up!" without even leaving his cell. In a Parole hearing, he admits he has regrets about pushing his mother down the stairs, and if he had an opportunity to go back in time, he'd "certainly reconsider it."

Drederick Tatum fighting in the show.

Drederick Tatum boxing against Homer in The Homer They Fall. 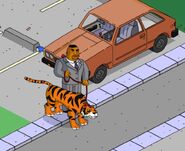 Drederick Tatum talking to the crowd.
Add a photo to this gallery
Retrieved from "https://simpsonstappedout.fandom.com/wiki/Drederick_Tatum?oldid=241678"
Community content is available under CC-BY-SA unless otherwise noted.