Doctor Nick Riviera or simply Dr. Nick is a doctor in Springfield. He is a premium character with a price of 90 donuts, and earns 50% more money and XP for jobs.

During the Black Friday 2015 Promotion the player got a refund (rebate) of 25 donuts when purchased.

Dr. Nicholas Riviera M.D. is a quack physician, although he claims to be "just as good as Dr. Hibbert M.D.", who studied at dubious medical schools. He is inventor of Juice Loosener and Sun & Run. Riviera is of Hispanic descent, and in the European Spanish dub he is specifically given an Argentinian accent. He has a medical degree from Hollywood Upstairs Medical College (where he apparently spent much of his time using his ability to acquire prescription drugs to impress a succession of attractive women back in the 1970s), and a great deal of luck. Thus far, none of the patients he has swindled, maimed, or given useless or dangerous medical advice seems to have sued him although a few have come after him in person. 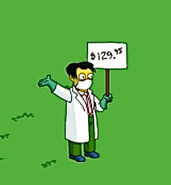 One of Dr. Nick's random level up messages.

Add a photo to this gallery
Retrieved from "https://simpsonstappedout.fandom.com/wiki/Dr._Nick?oldid=253596"
Community content is available under CC-BY-SA unless otherwise noted.