(since Treehouse of Horror XXIV Event)

Devil Flanders is a costume for Ned unlocked during the Treehouse of Horror XXIII Event. During the event, all his jobs were rewarded with one treat.

He was re-released as a premium item for the subsequent Treehouse of Horror events.

He returned during the Homer's Chiliad 2016 Event bundled with the Five Alarm Chili.

During the Treehouse of Horror XXVII Event it was available through the THOH Flashback Bundle #4 if the player didn't have any of its content.

He returned on October 26, 2018 during the Treehouse of Horror XXIX Event as a possible prize in the Mystery Jack-O-Lantern.

Homer found that he was out of donuts at work, and even his emergency donut was gone (Homer had already eaten it). Anguished, Homer lamented that he would sell his soul for a donut. As soon as the words were out of Homer's mouth, the Devil appeared in the guise of Ned. After confirming that Homer really did want to sell his soul for a donut, the Devil produced a contract and a flaming pen. Homer signed, and the Devil gave him the donut (straight from Hell's Kitchen, according to the lettering on the apron of the demon who served it). 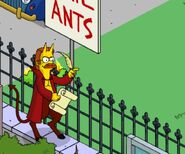 Devil Flanders signing up new clients.
Add a photo to this gallery
Retrieved from "https://simpsonstappedout.fandom.com/wiki/Devil_Flanders?oldid=252554"
Community content is available under CC-BY-SA unless otherwise noted.