This article is about the character. For event, see Deep Space Homer 2016 Event.

Deep Space Homer is a limited time costume for Homer released on January 21, 2016 during the Deep Space Homer 2016 Event. It was the second personal prize that could be obtained in the event, however, his visual jobs can only be unlocked later in the questline.

After seeing their popularity decline (as reflected by lower TV ratings for shuttle launches), NASA decides to improve its public image by sending a man into space to whom the average American can relate. In this case, Joe Average is Homer Simpson. 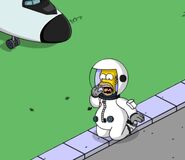 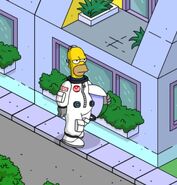 Deep Space Homer walking like a hero.
Add a photo to this gallery
Retrieved from "https://simpsonstappedout.fandom.com/wiki/Deep_Space_Homer?oldid=212085"
Community content is available under CC-BY-SA unless otherwise noted.