Declan Desmond is a character released on July 15, 2015, along with the Level 55 update. He is unlocked upon completion of the Woosterfield Hotel.

Declan Desmond is an eccentric and skeptical British documentary filmmaker who has directed several films. 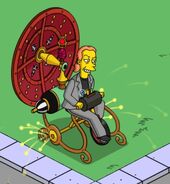 Declan riding the Chrono Trike back to level 1.

Add a photo to this gallery
Retrieved from "https://simpsonstappedout.fandom.com/wiki/Declan_Desmond?oldid=245660"
Community content is available under CC-BY-SA unless otherwise noted.