This page is about debris in Springfield. For debris in Krustyland, see Krustyland Debris.

Debris are rather unique decorations found by either purchasing Land Expansions or successfully launching the rocket. There are five different variations of debris, none of which can be sold; however, they can be moved and stored. The only way to completely remove them is to make either Homer or Lisa perform the job Clean Up Springfield. Upon completion of this job, the debris will be removed. On average, each 16x16 Land Expansion square contains three to five pieces of debris.

There is also a very rare chance of receiving a single Donut upon the removal of the debris.

During the Winter events, waste barrels changed from orange and yellow to silver and red.

This is the highest paying job in the game, in terms of money per hour. However, the job is limited. The payout for cleaning 1 is 35 cash and 1 XP. 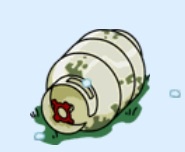 The waste barrels in the Christmas Events.

Lots of different types of debris.

Homer cleaning up Debris.
Add a photo to this gallery
Retrieved from "https://simpsonstappedout.fandom.com/wiki/Debris?oldid=246444"
Community content is available under CC-BY-SA unless otherwise noted.