From Springfield With Love

The Death Table is a limited-time decoration that was released on March 28, 2017, as part of the Secret Agents 2017 Event. Together with Agent Bont they were the seventh and final prize to be won in the event's Act 1.

It returned on January 3, 2018 during The Buck Stops Here 2018 Event. With Agent Bont, they were a possible prize in the Shadow Government Mystery Box. 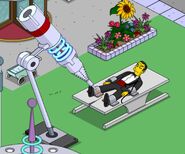 Agent Bont struggling on the Death Table
Add a photo to this gallery
Retrieved from "https://simpsonstappedout.fandom.com/wiki/Death_Table?oldid=225173"
Community content is available under CC-BY-SA unless otherwise noted.