Daredevil Bart is a premium outfit for Bart released on August 6, 2015, along with the Level 56 update. It's unlocked upon completion of Safety Dance Pt. 2.

Bart attempts to follow in the footsteps of his hero, a daredevil named Captain Lance Murdock. As part of becoming a daredevil himself Bart does increasingly dangerous stunts leading to his final stunt: jumping the Springfield Gorge on his skateboard. 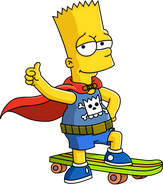 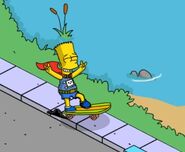 Daredevil Bart performing dangerous tricks.
Add a photo to this gallery
Retrieved from "https://simpsonstappedout.fandom.com/wiki/Daredevil_Bart?oldid=252921"
Community content is available under CC-BY-SA unless otherwise noted.