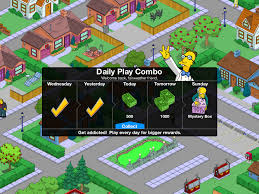 The Daily Play Combo is a reward system to the player in which they can earn extra Money (or a Mystery Box) by playing or simply logging into their Springfield daily and consecutively to receive this.

As of February 4, 2016, the Daily Play Combo was replaced by the Daily Challenge System if the player completes the Fresh Off the Donut Truck questline.

The combo will start as soon as the player begins playing Tapped Out and the next day they will start earning. Different rewards will be earned by players at different times but here is an example:

If the player misses a day or more, they can 'fix this' by paying 1 or more Donuts (depending on how many days have been missed - up to 4). After the five days are over, it resets to day one.