Vanity +100
The Crowd of Elves is a limited-time decoration that was released on December 11, 2019, as part of Act 1 of Abe's in Toyland 2019 Event. The first one was the second prize to be won in the event's Act 1. Additional ones can be bought for donuts for the duration of the event.

Crowd of Elves versions in the game (together). 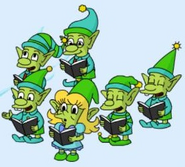 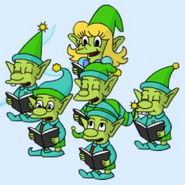 Variation 2.
Add a photo to this gallery
Retrieved from "https://simpsonstappedout.fandom.com/wiki/Crowd_of_Elves?oldid=241655"
Community content is available under CC-BY-SA unless otherwise noted.