Crawl is a limted-time character released October, 17 2017 during the Treehouse of Horror XXVIII Event, as the first prize of the Event's Act 2. He's unlocked after placing Crawl's Bar. He is a counterpart of Carl.

Crawl is one of the three trolls, with Lewd and Barfy.

After being captured and enchanted, Crawl can be released from Crawl's Bar and after 4 hours, player gets:

"I wonder what Lewd is thinking about when we turn into stone? I wonder if it's me?" 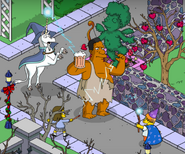 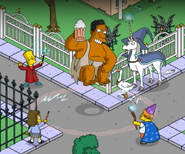 Status: Enchanted
Add a photo to this gallery
Retrieved from "https://simpsonstappedout.fandom.com/wiki/Crawl?oldid=208947"
Community content is available under CC-BY-SA unless otherwise noted.