Count Dracula is a limited-time character that was released on October 31, 2017, as part of Act 3 of the Treehouse of Horror XXVIII Event, He was the seventh and final prize to be won in the event's Act 3.

He returned as a premium item on October 3, 2018, during the Treehouse of Horror XXIX Event as a possible prize in the THOH Mystery Box.

Count Dracula was a Transylvanian vampire. He is a member of the Springfield Republican Party. He is not very popular there, as everyone always thinks his ideas are just plain stupid. Apparently he was in charge of ordering pizzas, and apparently gets the orders wrong, which contributed to his unpopularity. He claims that he has problems with the orders due to being confused due to being "half this, half that". 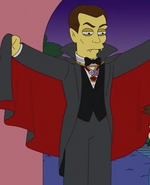 Count Dracula in the show. 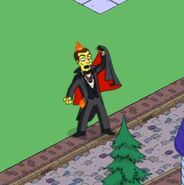 Count Dracula Living With His Burden (1). 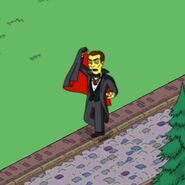 Count Dracula Living With His Burden (2). 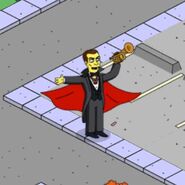 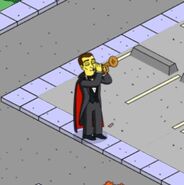 Count Dracula Playing a Tune (2).
Add a photo to this gallery
Retrieved from "https://simpsonstappedout.fandom.com/wiki/Count_Dracula?oldid=251848"
Community content is available under CC-BY-SA unless otherwise noted.