Costington's is a high-end department store located in Downtown Springfield. Their slogan is "Over A Century Without A Slogan". Costington's sponsors the annual Thanksgiving Day Parade and holds a "Love Day" celebration. Owned by Mr. Costington, the store has employed many Springfieldians, including Homer (as their parade Santa and as a mattress salesman), Gil and The Yes Guy. 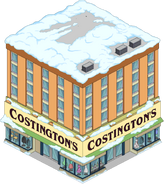 The building during the winter events.
Add a photo to this gallery
Retrieved from "https://simpsonstappedout.fandom.com/wiki/Costington%27s?oldid=211511"
Community content is available under CC-BY-SA unless otherwise noted.