A Flash of Two Nerds

Coolsville is a limited-time premium building that was released on July 5, 2016, during Issue 2 of the Superheroes 2016 Event. Upon completion, Milo is unlocked.

Coolsville Comics & Toys is a comic book store in Springfield. The store's owner is Milo, and the store's located right across the street from Comic Book Guy's store. 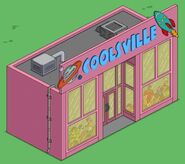 Coolsville winter animation.
Add a photo to this gallery
Retrieved from "https://simpsonstappedout.fandom.com/wiki/Coolsville?oldid=247002"
Community content is available under CC-BY-SA unless otherwise noted.