Coach Pommelhorst is a limited-time premium character that was released on July 17, 2019, as part of the Flanders Family Reunion 2019 Event. She was a possible prize in the Yard Sale Mystery Box.

Coach Pommelhorst is the successor to Ms. Barr and predecessor to Coach Krupt. She is Springfield Elementary's ruthless, no-nonsense gym coach and shows little to no empathy towards her students. 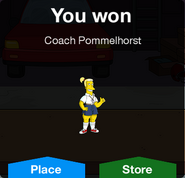 Coach Pommelhorst Having a Pen Fight.

Coach Pommelhorst in the show.
Add a photo to this gallery
Retrieved from "https://simpsonstappedout.fandom.com/wiki/Coach_Pommelhorst?oldid=251584"
Community content is available under CC-BY-SA unless otherwise noted.