Clownface is a limited-time costume for Krusty that was released on February 18, 2015 during the Superheroes 2015 Event. He was the third and final prize of the event's issue 1.

Clownface was a guest villain on the old Batman TV show. He was portrayed by Krusty.

Clownface checking Krusty-brand merchandise. No need to modify them. 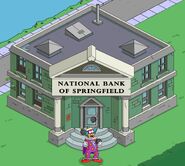 Clownface attacking a felon.
Add a photo to this gallery
Retrieved from "https://simpsonstappedout.fandom.com/wiki/Clownface?oldid=206396"
Community content is available under CC-BY-SA unless otherwise noted.