Clockwork Bart is a limited time costume for Bart released on October 20, 2015, during the Treehouse of Horror XXVI Event. It's the third prize to be won in the Event's second Act.

Clockwork Bart is Bart disguised as Alex DeLarge, the main character from the 1962 book and 1971 movie, "A Clockwork Orange". He wore this costume previously during a Halloween party at the Simpsons house. 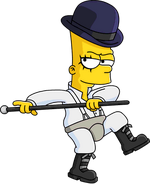 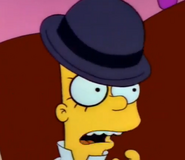 Add a photo to this gallery
Retrieved from "https://simpsonstappedout.fandom.com/wiki/Clockwork_Bart?oldid=255314"
Community content is available under CC-BY-SA unless otherwise noted.