watch 03:41
Wiki Targeted (Games)
Do you like this video?
Play Sound

Clock-Work in Progress is a questline released on October 16, 2014 during the Treehouse of Horror XXV Event. Completing this quest unlocks the costume Moog for Moe.

To get this costume players had to collect pieces of it during this quest. Each day a different piece of clothing was able to be found, four in total. These clothing items could be found anytime during the event after their release. They were found by squishing Rigellians. 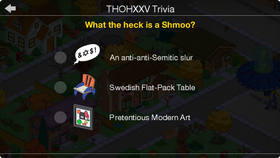 Once all the pieces were collected players had to answer a trivia question (What the heck is a Shmoo?) relating to the Treehouse of Horror XXV episode that premiered on October 19, 2014. Players could answer the trivia question as many times as they needed, but answering Pretentious Modern Art on the first try awarded the player with 10 Donuts.

Retrieved from "https://simpsonstappedout.fandom.com/wiki/Clock-Work_in_Progress?oldid=241898"
Community content is available under CC-BY-SA unless otherwise noted.