The Clawing Zombie is a community prize returning from the Treehouse of Horror XXIII event to the Treehouse of Horror XXIV Event. It required 10000000000 GOO to be collected by all players of The Simpsons: Tapped Out in order to be unlocked, a goal that was reached by October 12th for the players on the left side of the GMT line and October 13th for the players on the right side of the GMT line. She either meows and claws the air (similar to the other zombies.), or smashes into bits when tapped.

It returned on January 23, 2018 during the Bart Royale 2018 Event. It, along with Snarling Zombie came with the Pet Cemetery as a possible prize in the Doomsday Mystery Box. It was re-released again on October 11, 2018 for the Treehouse of Horror XXIX Event, as part of the Pet Cemetery + Zombies bundle. 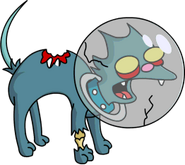 Clawing Zombie's unlock artwork.
Add a photo to this gallery
Retrieved from "https://simpsonstappedout.fandom.com/wiki/Clawing_Zombie?oldid=225160"
Community content is available under CC-BY-SA unless otherwise noted.