The Clash of Clones Event was the tenth major event in The Simpsons: Tapped Out. This event was made available to players on August 19, 2014. The main quest for this event was Prince and the Premise.

This update also brought new land to Springfield. 16 new plots of land were added to the bottom right of the player's Springfield (the land farthest from the mountains).

This event had two different types of currency; Elixir and Gold. Players could send Nerds to attack other Springfields. At the beginning the number of nerds was limited to 40 but this could go up by upgrading Castles. Elixir and Gold could also be earned by shielding your buildings or by rebuilding them when another player attacked (done by tapping/clicking, players did not need to repurchase buildings).

Once players collected 800 Gold they unlock the ability to buy cheaters. Cheaters allow you to wreck a building immediately (instead of sending nerds) or they will defend your buildings under attack.

The event preceded the Treehouse of Horror XXV Event, as only Major Event followed by another.

Below is a list of all the new content included in the initial Clash of Clones 2014 Event on August 19, 2014. Please note that after the event, some or all of the items listed may no longer be available:

*The related Castle must be at level 10 or higher for these items to be available in the store.
**Available for purchase after unlocked in the prize track.
***Added on September 4th.
****Added on October 2nd.

*Elixir could only be purchased on Wednesdays.

Below is a list of content which was previously released, and re-released for this event. These items were added during an update on September 4th.

The following characters can be found in the game files but have not been released for the event. These characters may be released later during the event.

During this update, players can attack other towns to earn Elixir and Gold. This is done by sending Nerds to attack houses or castles.

Costumes and Buildings could be upgraded during this event. Upgrades gave more benefits and unlocked new items. Elixir and Gold could be used for these upgrades. The Gold used was not lost, players just had to reach a certain amount for the upgrade. However the Elixir used was spent.

Upgrades to buildings increased nerd production, raised the amount of nerds a town could have, and increased the defense of a town. Increasing a defense bonus gave an extra hour of time to all attacks on that town, this gave players more time to notice attacks.

The following buildings/costumes could be upgraded:

Every Saturday at 2:00 PM (EST) player's nerd counts would increase to the max amount. This happened every week during the event. Players who already had a max amount of nerds did not get more as nerds cannot be saved after the max limit is reached.

This poll ran during the event. Players were asked: What do you think of this event? 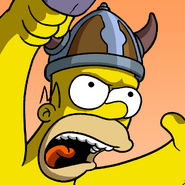 Invader to drop into other player's towns.

The Free Donut notification given to players on August 21st.

Add a photo to this gallery
Retrieved from "https://simpsonstappedout.fandom.com/wiki/Clash_of_Clones_2014_Event?oldid=241502"
Community content is available under CC-BY-SA unless otherwise noted.