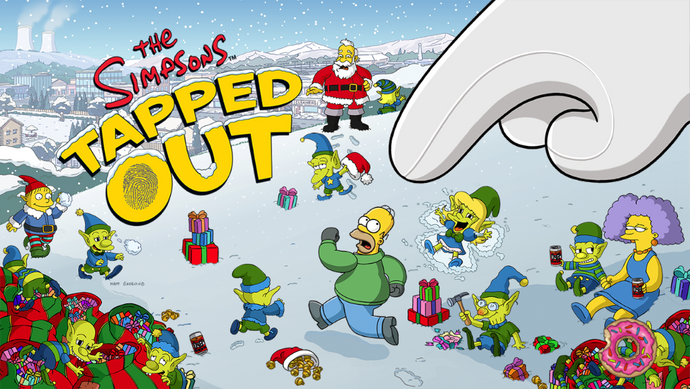 The Christmas 2014 Event (or Winter 2014 Event) was the twelfth major event to be released for The Simpsons: Tapped Out and the third Christmas-themed event. It was released to all players on December 3, 2014, shortly after the conclusion of the Thanksgiving 2014 Event. The Event followed a similar design to the Treehouse of Horror XXV Event in that it was split into two parts, the first running from December 3, 2014 - December 24, 2014, and prizes could be obtained during the first part, by sending characters to do jobs for Presents. The storyline started off with Santa relocating to Springfield and hiring Springfielders to help make toys due to global warming in the North Pole.

During the second part of the Event, from December 24 - January 14, 2015, players had to tap on partying Elves, which roamed around Springfield, and collect Elves in Bottles. After which the player could launch them from the Elf Cannon and 'deport' the Elves. Once launched, the player was awarded Elf Bells which could be collected to win the prizes in the Winter 2014 Part 2 prize track. Cogwheels were unlocked which were used to upgrade the Elf Cannon for "more fire power".

Just like the Treehouse of Horror XXV Event, both parts of this Event had their own special currencies, Presents and Elf Bells. Each currency was collected in their own unique ways and were accumulated by the player to win special prizes from the Personal Prize tracks. Each respective currency was only available for the duration of that part during the Event.

Along with all the new content that was released, the majority of the old content from the Christmas 2012 Event and Christmas 2013 Event also returned to be won or purchased, either with in-game Cash or Donuts.

Following the Frankincense, Myrrh, and Donuts quest, on December 24th, Gil returned with another Donut Sale, offering a bonus of up to 30% more donuts per purchase. The sale ended on December 27th.

The 16:9 splashscreen from the event.

The 4:3 splashscreen from the event.

The Daily Play Combo changed to presents and elves, much as in the previous event, Treehouse of Horror XXV.
Add a photo to this gallery
Retrieved from "https://simpsonstappedout.fandom.com/wiki/Christmas_2014_Event?oldid=201623"
Community content is available under CC-BY-SA unless otherwise noted.