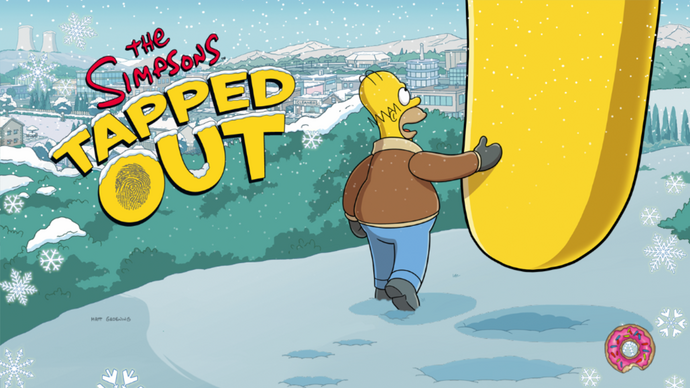 The Christmas 2013 Event (or the Holidays 2013 Event) was the sixth major event to be released for The Simpsons: Tapped Out. It was the second Christmas themed event released for the game. The event was said by Electronic Arts to be the biggest update yet. It was available to all players on December 10, 2013, and ended on January 14, 2014 (originally supposed to end January 7, 2014). The new currency introduced in the event was Gift Cards, which could be obtained from the Present Depot or from having friends visit the player's Springfield and leaving Gift Bags. A new splashscreen and app icon were also released as it was a major event.

The prize system returned which was previously used in the Treehouse of Horror XXIV Event, including community prizes. Many of the Christmas jobs from the past Christmas event returned, this time with gift cards as the reward as opposed to Santa Coins. The Christmas 2013 Event brought a lot of content and new gameplay. More was released in this event than the previous Christmas event, but this could be due to a rise in the game's popularity and high demand for new content. For players who frequently visit other Springfields, the event bought useful shortcuts into the game. Most notably, the player could now travel forward and backwards through their friends list from their Springfield's, allowing neighbor visits to be much faster and easier.

Another key feature was the character locate button, which when tapped, brings the player to a character who is currently not doing a job or needs to activate a quest. This was a much needed addition for those who have lots of characters and buildings in their Springfields, as characters can become hard to locate otherwise.

In addition to all the new content and the prize system, a new minigame, the Holiday Wheel, was introduced. This was a unique minigame and consisted of collecting Spin Tokens from the Egg Nog Bar. A token was received every 24 hours as income, and could be used for one play at spinning the wheel. There were 10 sections in the wheel and wherever the wheel stops determines which prize the player receives, the hardest prizes to claim being the Snow Monster and Claus Co.

Players could now place Gift Bags in their friends' Springfields too, and when opened will reward the player with Gift Cards and in rare cases, a Spin Token. A maximum of five gift bags can be placed in each neighbor's Springfield every day.

A number of quests were added, including the main quest chain, Too Much of a Good Thing, as well as a series of minor quests. Most of these minor quests were unlocked upon earning Personal, Community, or Holiday Wheel prizes.

Below is a table showing the number of Gift Bags which must be placed by all players of The Simpsons: Tapped Out. The first prize required 450 million Gift Bags to be placed, and the highest prize required just over 1 billion. The final prize, The Candy Cooling Towers was obtained on January 3, 2014, eleven days prior to the end of the event. The community prizes originally had much larger targets, but they were lowered when accumulation of Gift Bags occurred much slower than anticipated.

The Holiday Wheel is a new unique minigame. For each spin of the wheel, the player must have a Spin Token. Spin Tokens are obtained once a day from Egg Nog Bar, by purchasing them with Donuts, or, once all the personal prizes are obtained, every 1000 gift cards will grant the player one token. The prizes include the holiday façades from the previous Christmas Event, Mr. Plow, Plow King, Claus Co and many more.

Below is a list of all the new content included in the event. Note that some or all of the items listed below may not be available after the event.

Below is a list of content which was previously released with the 2012 Christmas Event, and re-released for this event. 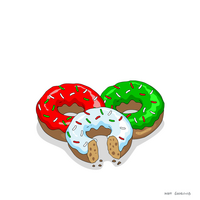 Following The Great Donut Caper quest on December 24, Gil Gunderson appeared in Springfield to offer players a sale, giving up to a 30% bonus on donuts. This sale ended on December 31.

The personal prizes screen with all prizes received.

The screen shown when all Community Prizes have been unlocked.

The Holiday Wheel, the new minigame.

The notification shown if a town had too many gift bags.

Retrieved from "https://simpsonstappedout.fandom.com/wiki/Christmas_2013_Event?oldid=244580"
Community content is available under CC-BY-SA unless otherwise noted.