The Chocolate Shoppe is a limited-time building released on December 8, 2015, along with the Winter 2015 Event. It is the third prize to be won in the Event's Act Two.

It was re-released on December 21, 2016, during the Winter 2016 Event as a possible prize in the Gold Mystery Presents.

It was re-released again on February 8, 2017, during the Valentine's 2017 Promotion after starting Large and In Charge Pt. 5.

Once again, it was re-released on November 29, 2017 during A Rigellian Christmas 2017 Promotion as a prize in the Winter Wonderland Mystery Box.

It returned on December 5, 2018 during A Simpsons Christmas Special 2018 Event as a possible prize in the Winter Wonderland Mystery Box.

The Chocolate Shoppe is a building from The land of Chocolate, a Homer-fantasy location he slips into upon being interviewed by the German businessmen that bought the Springfield Nuclear Power Plant, Hans and Fritz. 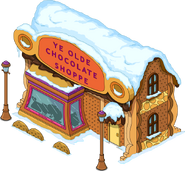 The flipped image of Chocolate Shoppe during winter.
Add a photo to this gallery
Retrieved from "https://simpsonstappedout.fandom.com/wiki/Chocolate_Shoppe?oldid=230635"
Community content is available under CC-BY-SA unless otherwise noted.