Chirpy Boy and Bart Jr. are, limited time, characters released during the Easter 2014 Event. They are one of the prizes that can be won in the Pink Easter Box. Like Sherri and Terri, even though they are two characters, they are treated as one. When tapped, they jump up and then float down.

Chirpy Boy and Bart Jr. are Bolivian Tree Lizards that Bart named. After shooting a bird with Nelson's BB gun, Bart cares for the eggs found in the bird's nest. When the eggs hatch, the family is surprised to find that they were actually lizard eggs. Bart, continuing with his motherly impulses, names the hatched lizards Chirpy Boy and Bart Junior. 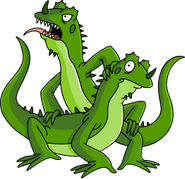 Lizards In Flight [click and they glide and hiss]
Add a photo to this gallery
Retrieved from "https://simpsonstappedout.fandom.com/wiki/Chirpy_Boy_%26_Bart_Jr.?oldid=255673"
Community content is available under CC-BY-SA unless otherwise noted.