The Chinese Acrobatic Theatre is a limited-time building released on March 7, 2016, as part of the Burns' Casino 2016 Event. It's the fourth prize to be won in the Event's Act 3.

It returned on March 21, 2018 during The Springfield Jobs 2018 Event as a possible prize in the Asian Wonders Mystery Box. 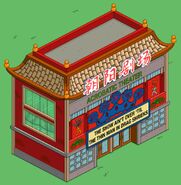 Add a photo to this gallery
Retrieved from "https://simpsonstappedout.fandom.com/wiki/Chinese_Acrobatic_Theatre?oldid=214398"
Community content is available under CC-BY-SA unless otherwise noted.