Cecil is the brother of Sideshow Bob, son of Dame Judith Underdunk and Dr. Robert, uncle to Gino Terwilliger and brother in-law to Francesca Terwilliger.

When he was young, Cecil was ignored repeatedly by his parents, and instead compared to Bob, similar to the rest of his life.

Cecil's dream since a child was to become Krusty's sidekick on The Krusty the Clown Show. Cecil spent, according to Bob, "four years at clown college", to which Cecil replies, "I'd thank you not to refer to Princeton that way". Krusty and the producers of his show rejected Cecil during his audition.

Cecil offered to perform his prepared "pie-in-the-face take" before he was ushered off-stage, but this did not change the producers' minds as Cecil lacked the dignity necessary to pull the bit off. It was then that Krusty spotted Robert, standing to the side in a fine suit and looking like he genuinely didn't want to be there. Krusty ordered a pie-in-the-face for him, the resulting impact knocking off Robert's top hat and causing his hair to spring up from under it, Krusty hired Robert as his sidekick on the spot. Cecil resented and was jealous of his brother, His birthday is also on May 18, 1973.

Upon appearing in your town, Cecil will immediately begin the quest chain Cecil's Redemption. At the beginning of this quest, his only available action is the one required to complete the quest.

At the end of the Terwillgers 2015 event he will begin the Say "Cheers" quest chain and now has multiple actions to be completed. 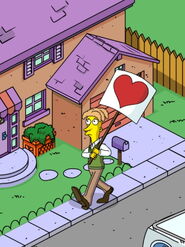 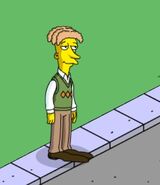 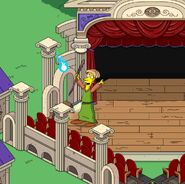 Cecil performing at the Opera.

Cecil Practicing Stand-Up in front of the Open Air Stage.

Cecil after completing a job 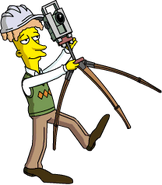 Cecil Terwilliger in the show
Add a photo to this gallery
Retrieved from "https://simpsonstappedout.fandom.com/wiki/Cecil_Terwilliger?oldid=252192"
Community content is available under CC-BY-SA unless otherwise noted.