The Lady of the Louse

Arguing Which Side of the Aisle is Better

Consumerism: +10
The Capital City Capitol Building is a limited-time premium building that was released on January 3, 2018, as part of The Buck Stops Here 2018 Event. Upon completion, Rose Quimby is unlocked.

The Capitol Building is the main administrative building in Capital City and in Springfield's State. It houses the office of Governor Mary Bailey, and at one time the Unnamed Governor as well as the State Legislature which consists, presumably, of the State House of Representatives and State Senate. 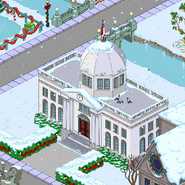 The Capital City Capitol Building in winter
Add a photo to this gallery
Retrieved from "https://simpsonstappedout.fandom.com/wiki/Capital_City_Capitol_Building?oldid=236025"
Community content is available under CC-BY-SA unless otherwise noted.