The Candy Cooling Towers is a façade for the Cooling Towers, and the final community prize in the prize system for the Christmas 2013 Event. It could have been obtained by logging in to the game by January 14. 1.2 billion Gift Bags were needed to obtain this prize. It was obtained January 3, 2014. 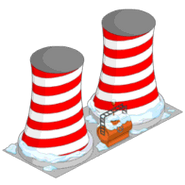 Add a photo to this gallery
Retrieved from "https://simpsonstappedout.fandom.com/wiki/Candy_Cooling_Towers?oldid=180608"
Community content is available under CC-BY-SA unless otherwise noted.