Cadet Lisa is a limited-time outfit for Lisa released on March 15, 2017, as part of the Rommelwood Academy 2017 Event. She was the fourth prize to be won in the event. 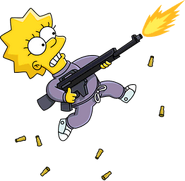 Cadet Lisa's unlock screen.
Add a photo to this gallery
Retrieved from "https://simpsonstappedout.fandom.com/wiki/Cadet_Lisa?oldid=198926"
Community content is available under CC-BY-SA unless otherwise noted.