(since Treehouse of Horror XXIV Event)

The Burns Monster is a limited-time NPC first available during the Treehouse of Horror XXIII Event, where it is unlocked after the Bad Dream House task chain was started, and could have purchased for 300 Treats from the store. He is a counterpart of Mr. Burns.

When Bart, Lisa, Milhouse, and Nelson were terrorizing the Town with pranks (although Lisa was hardly involved), Ned Flanders attempted to stop the children's shenanigans by scaring them. He transformed the Church in to a "Heck-House". After failing to scare them, Ned Prayed to God for unholy powers, thus becoming Satan. He showed the Kids what sins would send them to Hell, and what happens to Sinners when in hell. The Burns Monster was there along with other various demon formed characters. 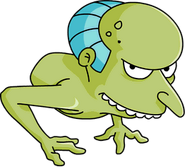 Burns Monster in "Treehouse of Horror XVIII".
Add a photo to this gallery
Retrieved from "https://simpsonstappedout.fandom.com/wiki/Burns_Monster?oldid=208959"
Community content is available under CC-BY-SA unless otherwise noted.