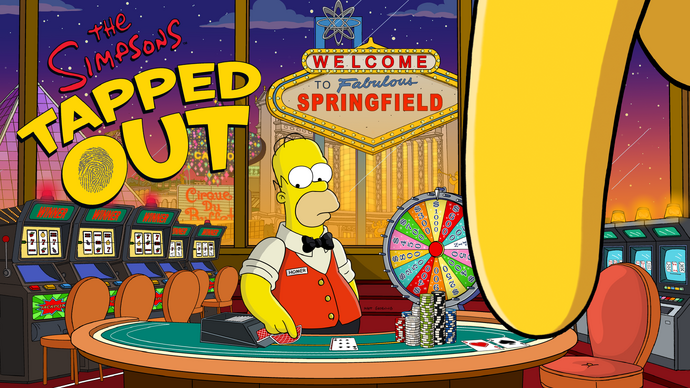 Burns' Casino 2016 Event is the first major event of 2016 and the 19th major event overall. It was released on February 23, shortly after the release of the World's Largest Redwood update. With this update, a new feature was added, being possible to move areas of buildings and decorations at once.

This event is similar to the Winter 2015 Event and the Treehouse of Horror XXVI Event, where NPCs have to be tapped, in this case Casino Gamblers, in order to get event-currency.

Like usual, the event was divided into three acts, scheduled as following:

This event introduced several new limited time currencies, each one having their own use.

Firstly there are the Red Chips (

), which serve as the personal prizes currencies, one for each act. Those can be obtained by playing the limited time minigames, which rewards different amounts of those depending on the luck of the player; by tapping Casino Gamblers, which rewards 10 Chips when tapped; by sending certain characters on jobs at the Burns' Casino, which rewards 110 Chips every 4h (even for premium characters) and by completing Daily Challenges

Another Personal Prize currency are the Players Club Points (

), which serves as a VIP currency and has its own track that lasts the entire event. These are awarded when obtaining new content from this event, regardless if it is from crafting, personal prizes or premium content. This is unlocked when the player earns their first points.

Like what happened in past events, this event has several currencies used for crafting. Crafting is unlocked when the quest Craft Punk is completed. There are five crafting currencies:

More information can be seen below.

Finally there is the Casino Tokens (

), currencies used to play on the various limited time minigames of this event. They are rewarded by sending characters at jobs on the Burns' Casino and there is a low chance of obtaining them by tapping the Casino Gamblers.

There are three different mini games in this event. When playing you can obtain event currencies (

). You can also obtain crafting currencies (

) with the mini games.

In contrast to most events, and following the style of the Treehouse of Horror XXVI Event, the progress bar for the personal prizes was reset to zero each time a prize was reached. Thus only the amount of currency required for the current prize is shown there. The currency counter in the lower left of the screen still showed the total amount of currency collected, though.

For each act, a realistic estimation is that a regular (daily) player (using some 7 characters at Burns' Casino) will be able to earn some 8000 to 10000

per day, thus having a realistic chance of getting all personal prices as follows:

Like in many previous major events, players were able to get bonus Donuts once they had unlocked the last prize in the current prize track. Every 8500 subsequent prize track currency, they were presented with 3 boxes containing either one, two or three Donuts. The boxes worked similar to the ones from the Bonus Levels. However instead of the usual 50,000 Cash, players had to spend 150,000 Cash to open another box.

Like usual, crafting returned once more. However, new to this event, all items are released at once but the player has to upgrade the crafting level to unlock more items. Also, on Level 1 and 2, the craftables have a cap of how much they can be crafted, but on Level 3 the cap is removed, however the Players Club Points are not earned when the level 2 cap is exceeded. Each time the player upgrades a level, a new currency is unlocked, so it is advised for the player to buy everything they can before start upgrading their crafting level.

During the event, in addition to the usual Daily Challenges, the following event themed challenges were added:

The Splashscreen for the Event

The Icon for the Event

The prize screen for the Players Club Points currency

Retrieved from "https://simpsonstappedout.fandom.com/wiki/Burns%27_Casino_2016_Event?oldid=188619"
Community content is available under CC-BY-SA unless otherwise noted.