The Brown House is the second home to be built in The Simpsons: Tapped Out. It is mandatory to be built in order to complete the tutorial, as part of The New Evergreen Terrace questline.

740 Evergreen Terrace or the Brown House is a house in Evergreen Terrace that was inhabited by Mr. and Mrs. Winfield and later Ruth and Laura Powers. It is one door right from the Simpsons and two doors down from the Flanders. Sideshow Bob, disguised as Walt Warren, moved into the house until he was arrested again. The real Walt Warren then moved out of 740 Evergreen Terrace and the house was then occupied by a cousin of Ned Flanders, Ted Flanders. It's later inhabited by Terrence, Emily and their children, T-Rex and Corduroy. They moved out when they found out it wasn't cool to live in Springfield anymore. The house has a large swimming pool. 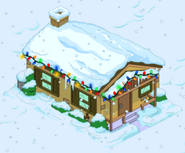 Add a photo to this gallery
Retrieved from "https://simpsonstappedout.fandom.com/wiki/Brown_House?oldid=237454"
Community content is available under CC-BY-SA unless otherwise noted.