The Simpsons: Tapped Out Wiki
Register
Don't have an account?
Sign In
Advertisement
in: Characters, Premium Items, Premium Characters,
and 10 more

Brendan Beiderbecke is a limited-time premium character that was released on January 8, 2018, during the Haw-Haw Land Promotional. He is unlocked upon the completion of the STEM Conference Hotel.

He returned on February 12, 2018 during the Valentine's 2018 Promotion. He, along with the STEM Conference Hotel was a possible prize in the Date Night Mystery Box.

He returned again on August 1, 2018 during the Moe's Ark 2018 Event as a possible prize in the Zoo Gift Shop Mystery Box.

He returned on January 23, 2019 during the Love, Springfieldian Style 2019 Event once again as a prize in the Date Night Mystery Box. 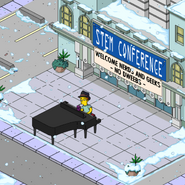