Brandine Spuckler is a premium, limited time, character in The Simpsons: Tapped Out who was released with the Valentine's Day 2014 Event. She is a unique character, as she can be set on jobs to unlock other characters.

She also returned on August 1, 2018 during the Moe's Ark 2018 Event. She was a possible prize in the Zoo Gift Shop Mystery Box.

She returned on January 23, 2019 during the Love, Springfieldian Style 2019 Event once again as a prize in the Date Night Mystery Box.

Brandine and Cletus are both stereotypical representatives of so-called “trailer trash.” Brandine and Cletus were married by Homer despite the fact that they are oft-insinuated to be related (siblings, cousins, each other's parents, and aunt/uncle), once noted when she said to Cletus, "You are the most wonderful husband, and son, I ever had," as well as when she complained they should kiss in front of her parents and Cletus said, "They's my parents too.". It is also implied that she was divorced four times prior to her marriage to Cletus. 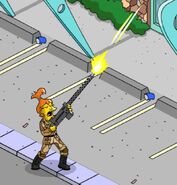 Brandine birthing another Spuckler.
Add a photo to this gallery
Retrieved from "https://simpsonstappedout.fandom.com/wiki/Brandine?oldid=242445"
Community content is available under CC-BY-SA unless otherwise noted.