Not Yet Spring Cleaning 2019 Event

Vanity: +400
The Box Factory is a limited-time premium building that was released on January 9, 2019, as part of the Not Yet Spring Cleaning 2019 Event.

The Springfield Box Factory is a box factory located across the street from Krustylu Studios. The Box Factory manufactures boxes to ship nails. Although some boxes are seen on conveyor belts in partially assembled form, the factory does not fully assemble the boxes in Springfield. According to the head of the Box Factory, that is done in Flint, Michigan. The Box Factory has a room that was the most popular room of the tour because of the one important difference, which was taken out, making it just like the other rooms. 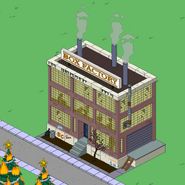 Box Factory's animation.
Add a photo to this gallery
Retrieved from "https://simpsonstappedout.fandom.com/wiki/Box_Factory?oldid=238032"
Community content is available under CC-BY-SA unless otherwise noted.