The Girls Just Want to Have Fun

Booberella is a limited-time premium character first released with the Treehouse of Horror XXIV Event.

She returned on October 3, 2018 during the Treehouse of Horror XXIX Event as a possible prize in the THOH Mystery Box.

Booberella hosts late-night monster movies and always dresses in low-cut vampire-style outfits that show lots of cleavage. She is well aware of her large breasts, and constantly draws attention to them, makes reference to them, or tells people to look at them.

Booberella burning on a stake.

Booberella burning at the stake. 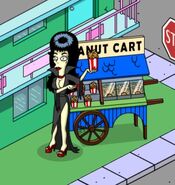 Booberella in the show
Add a photo to this gallery
Retrieved from "https://simpsonstappedout.fandom.com/wiki/Booberella?oldid=245527"
Community content is available under CC-BY-SA unless otherwise noted.