Bonestorm Santa is a limited time character released on December 3, 2014 during the Christmas 2014 Event. He was the seventh prize to be won in the Winter 2014 Part 1 prize track.

It returned as a premium rebate offer during The Invasion Before Christmas 2017 Event. It gave a bonus of 20 donuts after purchasing.

Bonestorm was released in a very aggressive marketing campaign. A TV ad for Bonestorm showed two kids playing a video game and being bored with it. Then the house shook, a hip-looking Santa crashed his sleigh through the wall, and his two reindeer growled and snarled at the kids. "Santa" then used a bazooka to shoot Bonestorm into their video console and shouted, "You want excitement? Shove THIS up your stocking!" After this, there were some shots of the kids playing the game and two six-armed characters on-screen beating each other while blood sprayed everywhere. The ad finished with the Santa character saying, "So tell your folks: 'Buy me Bonestorm or go to Hell!'" 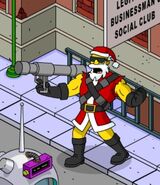 Kaboom!
Add a photo to this gallery
Retrieved from "https://simpsonstappedout.fandom.com/wiki/Bonestorm_Santa?oldid=255660"
Community content is available under CC-BY-SA unless otherwise noted.